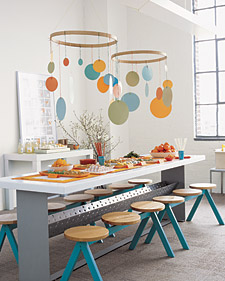 i did not like the first issue. it contained worthless info that i had no use for. i have since warmed up some to it, but i have a major problem that i cannot get past: the editor.
first some good to balance out the karmic schism i’m about to create: these mobiles from the baby shower in the new issue are made from construction paper and embroidery hoops. that’s creative and good looking. kudos.
now, for the bad = trying to read ANYTHING written by the editor beast, Sarah Humphreys.
for example:
“Editor-in-chief Sarah Humphreys moved into a cozy (okay, claustrophobic) apartment. Stumped by her pressing problems, she talked (okay, complained) about them at work, all the time.
The home editors, in a moment of selfless generosity (or utter exasperation?), volunteered to work their magic on her itty-bitty abode, and dreamed up a slew of impressive solutions.”
in three sentences, she uses a parenthetical in every one of them. 3 out of 3. that’s 100% of her sentences. its impossible to read – it makes my head hurt.
you’re thinking maybe i just picked the only crappy sentence in the article. but nO. they’re all that way:
“One reason for the mishmash: I purchased the white Ikea sofa and oversized chair I’m sitting on from the woman who lived in the apartment before me, since I was (rightfully) doubtful that my own sofa would fit in the space (it wouldn’t have even made it through the front door). In addition, the walls were painted a bland butter color (affectionately dubbed masking-tape yellow’ by Page), which made the apartment dark, and therefore even more confining and cavelike.”
two sentences — three of them!!! where did she learn to write like this? i have to assume that martha was in jail when they made her editor?
and its not just this issue. its every month! every freaking month i have to try to decipher some meaning from what this woman is trying to say as she barrages me with statement after not clever statement put in PARENTHESIS. (just use a comma!)
(and i don’t really mean ugly, it just made for a good post title – she’s actually pretty cute i guess)