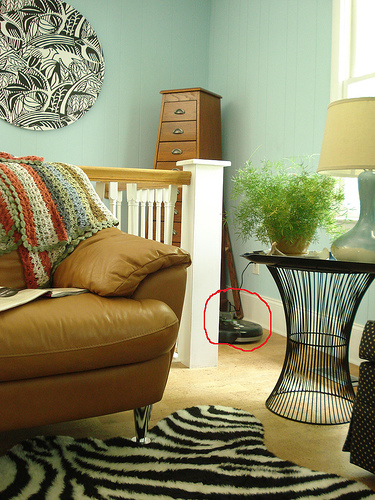 i was requested to review ronnie, our vacuuming robot. he is pictured here, in his natural habitat: the corner of the kitchen.

brian got him for me for christmas last year. he’s a roomba scheduler and he comes with two virtual walls you can set up to keep him in and out of certain areas. i definitely had to warm up to him — at first i thought he was pretty useless, but now, he’s great. i’ve accepted him for what he is and our relationship has blossomed because of it.

i turn him on usually once a day. after dinner, we’ll let him have at the kitchen, getting up any mess we made cooking and a day’s worth of cat litter that’s been pranced around out of the cat box. he’ll go for about 1.5 hours before dying, and that’s about enough to get the kitchen done. he does all of the walls, and corners and then goes diagonally back and forth the entire room. the only problem he has is with the chairs at the table, but he manages to unstick himself from them eventually and keep cleaning.

if we’re having company over, i’ll use him then too. he can do a quick sweep of the house and get most everything off the floor. granted, he’s not a substitute for a good vacuuming. he doesn’t have tons of suction, and his bin is pretty small, so it needs to be emptied almost after every use.

i’d say the number one thing i like about him is that he gets cat litter up. we have three cats, and i’m a clean freak, so litter is everywhere, and it drives me crazy. he gets it up, and life goes on. we thought the cats would at least be interested/scared/friendly with him, but they pay him no mind at all. if he’s coming at them, they politely step out of the way.

« swordring
bookcase of the day »