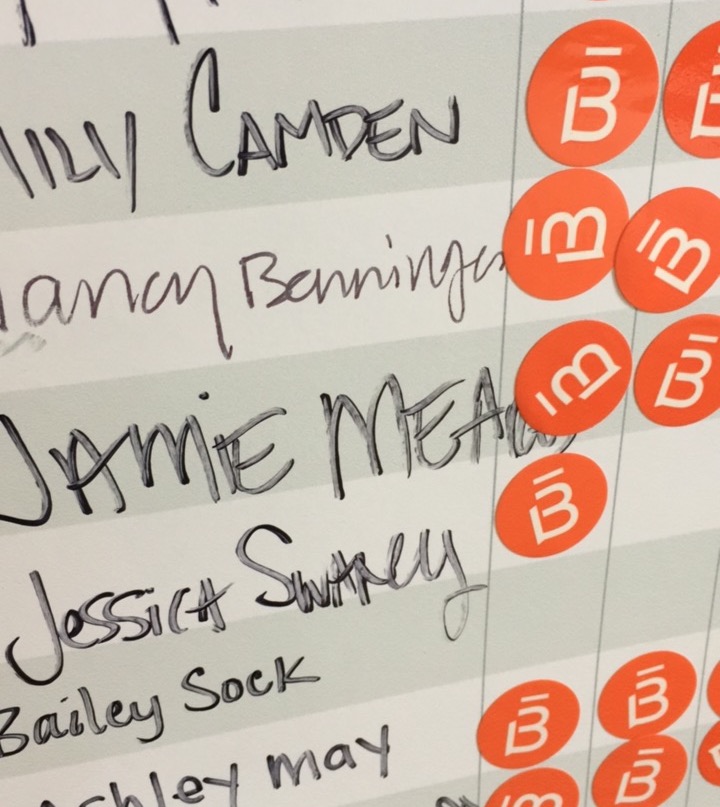 about what i did on sunday.

8:45am
i wake up, look at irma on the internet, then a text from my dad about his girlfriend loving a dessert buffet?
i eat a small bite of a danish-esque thing that appeared in a ziplock bag in the fridge, make enough coffee to fill up about 1/3 of my travel mug/exist, sling the dogs around the block and head out the door.

9:45am
barre 3.  it’s miraculous really, because i was 18th on the waitlist when i went to sleep and somehow made it in by the time i woke up.  here’s to everyone who drank too much saturday night and cancelled.

10:45am
done.  went up an inch and down an inch until my legs are wobbly.  it was particularly tough today, i think because the instructor was fresh off a studio tour and had some tricks up her tank she was trying on us.  there was a whole lot of ‘we’re not done yet!’.  i actually was done several times.

11:00am
grab an outdoor seat at capital club 16.  everyone’s lined up, waiting for the doors to open, while i smugly sit at my table, judging, avoiding the fray – poised to people watch, sit in dappled sunlight (read: full shade always) and have meaningful conversations with my friends who end up both canceling last minute.
i chose poorly (not the friends, the seat) – it was rull windy and a bit cold – and the inside eaters saw they had won as i put a sweatshirt over my sweatshirt.  so be it.  tad joins me.
every sunday i get the same thing: coffee, the eggs Norwegian with fries and a side of garlic-ranch-aoili-something, and 3 pickles.  i eat about half of it, and he takes care of the rest.
we linger, the people watching is decidedly better than the weather. then we decide to move to the sunnier side of the street, and go drink lavender lattes at devolve. 1pm
we scoop the dogs, walk up to devolve (on glenwood south), and grab a seat on a sidewalk.  the aforementioned latte is sweet and delicious and the people watching continues to intrigue.  we read the sunday NYT (this article about the humble wealthy tickled me), do more judging, try on some hats, pose major for some pictures and then have a small heated discussion over whether he’s too old to send to good dog school (currently he’s a bad dog). (fave new sunglasses from barton perreira and one of those boyfriend tee’s i’m living in from old navy)

3:30pm
small nap.  the air is a little crisp and the windows in the house are open – it’s very pleasurable.  i don’t actually nap.  i do all the archived monday NYT crosswords on my phone while he naps.

4:45pm
i’m feeling like the last few days have been awfully glutinous so i schlep, literally – i don’t want to move – up to cameron village and take a flywheel class.  of course i’m glad i did once we get going.  the instructor is a friend, and she’s perfect at her job – yelling out that i’m doing GREAT! every time i try to sneak my rpms down (how’s she know?!?).  guiltily i turn them back up, and finish with my best score yet.  what a time to be alive.

6pm
home, sweaty – get a text from tad that we scored a wristband for the hopscotch sunday night shows, so jump in the shower.  hopscotch is a music festival held in downtown raleigh every year, and i’m gonna go ahead and say it – i think it sucks.  i’ve never had a good time.  and this year was no exception.  i’ll take the blame – i really don’t mind.  i don’t go with a game plan, or anything i’m stoked to see.  we took a chance on angel olsen last night, and turns out there wasn’t a warm bath nearby to slit my wrists in, or it could’ve been perfect. wait, i got ahead of myself
7pm
we grab the wristbands from a friend, drive downtown, park at pooles, duck in for a quick bite before the 8pm show.  we split the crab and fried tomato salad and the roasted beets.  i had a new drink with bourbon, jalapeno simple syrup and bitters.  it’s all 100%.

9:15pm
we leave/escape.  it’s a bummer because i wore some mom cropped jeans like i’m supposed to and practically no one saw.

9:30pm
to salvage the night, we eat more.  nothing is open in raleigh on sunday’s, and if it was, it’s closed by 9, so we go to krispy kreme, order 6 doughnuts because it feels right, and spend 30 minutes adding doughnut emojis to an instagram story.  i found it very enjoyable.

10:30pm
home.  pups walked – it feels like fall outside, and that gives me the feels!

11pm
watch first 30 minutes of gangs of new york.  i side-eye tad until he finally turns it off and i drift off to sleep thinking about christmas – generally, not specifically.